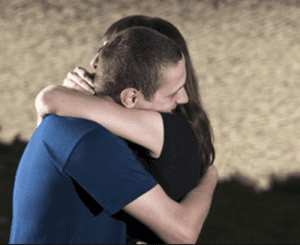 Antonia, how did your restoration actually begin?

My husband has come home. Praise the name of the LORD, that he didn’t just come back, but he came back broken before God. It’s been almost a year since we were restored, but, I remember as if it were today—the image of him coming into the house, hugging me and crying, crying a lot. It was the most beautiful day of my life!!

Incredible too, is that on the same day he came home, he’d asked me to go to church and we went. We arrived early, we attended the service and then to my utter surprise and joy, at the time of the altar call, he stood up and walked down the aisle. Like a blink of an eye and there he was accepting JESUS, as His unique and sufficient Savior of his life ... IT WAS TOO MUCH FOR ME, IT WAS PERFECT!! Totally beyond what I could ever have imagined or dreamed.

My husband, of today, is another person than the man I married. My husband is kind, he is caring, he is attentive, he does things that I used to beg for (but no longer even need to ask), and today, he also prays and gives praise to GOD, for changing his life and marriage.

OUR God is perfect!!

It all started when I received an anonymous message on my cell phone, with a link that read: Your husband is with another woman in this photo. Wow, I was instantly in a fog, my heart skipped inside me, but for a moment I thought it was virus. Virus? That's right, I loved my husband so much that I did not want to believe it was true, but since I'm very curious, I decided to open it and to my surprise, there he was with an OW. I felt my blood drain from my face, my head began to spin, my sight darken. It was just horrible.

When I got home, I told him to leave, but he said he would not, he said it was all a lie and he did not know that person.That was the beginning of "hell" in my life.

Everything, everything I suspected of my husband, I would not believe, not until I myself discovered him with my work colleague, that’s when I knew he really was with an OW. Also because he started to change a lot. He began working nights always stating the same story that he had extra work. I stayed home alone,weekdays and weekends and nights.  It was awful!! He also began treating me badly, cursing at me, sometimes he’d spend days without coming home, saying that he was at his friend’s house. Yet, I found out that he was constantly giving gifts and buying presents for the OW, which only made me cry and cry. But at the same time he always told me that he wanted to stay with me.

It was then that we started looking for a house to rent and we found one, me with my hope, I thought that moving to the new house would be different and it was, it really was. On the day we moved to our new house, we were both anxious about the change especially me. Yet, it was there "I found" my happiness. I found RMI and my hope.

But, first, let me explain what happened. My husband came home and said he wanted to talk to my mother, I asked him if everything was okay, and he said, yes.

We went to my mother's house, and I saw when he left the room that she was in tears. I did not understand anything that was happening. I sat down and waited for someone to explain everything to me, that's when my husband came back in and began to speak: “I want to separate from you, I do not love you anymore, I am unhappy, I need my freedom, I married very young and I want to be free as a bird.” My world fell apart in an instant!!

It was 3 hours of conversation between us: tears and despair. I begged. I begged him to stay, but it was no use, I discovered that he had been with OW for about a year - it was terrible to discover I had been so unaware of what was happening right under my nose.

After we finished talking he went home, got some clothes, went back to my mother's house, gave me a hug and left. That moment seemed like life no longer had any meaning for me. I clung to my mother and cried and cried, howled really. I felt such a huge amount of pain inside me that it seemed that I had a deep gushing wound. It was actually physical pain I was experiencing, I had never felt anything like it before.

How did God change your situation Antonia as you sought Him wholeheartedly?

Without a doubt it was when I found RMI! I searched for everything I could find on the internet, for me I was already going crazy, because only I believed in the restoration of my marriage, NOBODY else.

Then I found you, and I ordered the book and leaned on it for my life. I began to follow everything I read there, and God began to change my life in such a way that I could never have imagined. I poured myself into it, I took the courses, reading the same lesson over and over and over again. As I read, I’d stop and I’d humble myself at the feet of God and from there, He was molding me, changing me, transforming me into a new woman.

I've always been a contentious woman, fighting for everything and that's where He healed me first. I've been changing and changing and changing all due to His Word. So much so, that the people around me would say they could see something different in me. I told them it was the love of God that had invaded me.

What principles, from God's Word (or through our resources), Antonia, did the Lord teach you during this trial?

I think I became a lover of reading in this process of finding RMI. I read some other books that have helped me but for me it’s the WONDERFUL book “GOD CAN AND Will RESTORE YOUR MARRIAGE”, that was crucial. If someone needs hope and a map to know how to change everything about themselves, this is the one to read.

What were the most difficult times that God helped you through Antonia?

The most difficult times were when people in my husband's family came to tell me what he did or did not do with OW. It was horrible and I always felt bad when I heard such things while still trying to remain gracious with a gentle and quiet spirit.

Antonia, what was the “turning point” of your restoration?

You know, from the day he left, I started to write a diary, write everything that happened to me throughout the day and evening. I wrote down everything I read and found on the internet. I wanted to look back to see how far I've come.

There were many fasts I took while I was in this desert, because I learned when fasting it’s so important because of how much it strengthens us. While fasting, I spent time and I sought the Lord more, sometimes I kept wondering how I could spend so much time away from His presence. Unfortunately I had to learn to seek Him out of pain. Each day that passed, I became more attached to the Lord!!!

Tell us HOW it happened Antonia? Did your husband just walk in the front door?  Antonia, did you suspect or could you tell you were close to being restored?

I think as of this day, his heart began to soften, but after that, nothing, no news, nothing. I continued in my position of expectation, of waiting on GOD.

It happened one morning while I was tidying up the house, he sent me a text message that said: “Wait on the LORD and trust that all will give Right for both of us. Thank you for being such a wonderful person. Kisses and I believe that this year, my life will take a turn for the better!”

Do you believe that ?? Look, when my husband left the house, he was unmoved, he said that he had not loved me in a long time, that he did not want me in bed anymore, that he could not even kiss me, and after all this time, he send a message like that!!! Only God!!

On New Year’s morning, I opened my email, and I saw an email from him with the subject: “Happy New Year.” I opened the email with my heart almost jumping out of my chest and I read this: “I have been wrong, in my life, but I know that God will change it. I believe that this year we will be happy again and maybe one day forget everything that’s happened ... I've been thinking a lot about you! Kisses and stay with God.”

Wow, can you believe how wonderful GOD is??? From this day on, he started to get in touch with me, to send me emails, text messages, though he NEVER called me, we just were exchanging messages. During this time God was drawing me ever closer to Him. Whenever he had any news about a delivery at the apartment he was in, he would let me know. These were surprising days, but there were days when I thought I would give up, circumstances would appear, I would feel weak, I would cry, but GOD was always there to console me. There were days when I would come home, sit on my bed and call Jesus to sit by my side and talk to me, it was incredible to have a HH so close!

Would you recommend any of our resource in particular that helped you Antonia?

I certainly would begin by just recommending the RMI web site, where they’ll find the life changing books. I still find how amazing it is that Erin talks about our attitudes and how we can change, just obeying GOD above all things.

Would you be interested in helping encourage other women Antonia?

Yes for sure. You know, I asked a lot from GOD, asking Him to show me women who were going through the same situation as me, and to my joy, the LORD entrusted me and every day HE has put hurting women in my path, so that I can comfort them and pray and send them to your site.

Either way Antonia, what kind of encouragement would you like to leave women with, in conclusion?

As I said earlier, seeking GOD above all things and obeying Him— that is all He wants from us and that’s what shows Him that we love Him. We need to love Him more than anyone, including our earthly husband.

This is what happened to me, I loved my earthly husband so much, I loved him so much, that the Lord had to remove him from my life, so that I could love my Heavenly Husband more than anyone or anything in this world, and this was the best thing that happened. This has meant more than my restoration.

Today, I love my husband even more than before, but it's different, because I love my Lord, my HH above him and anyone else!! 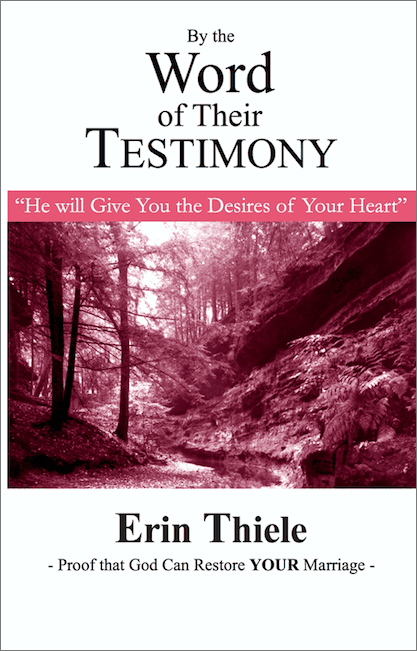